Girls and demons (UNIBEN babes as a case study) 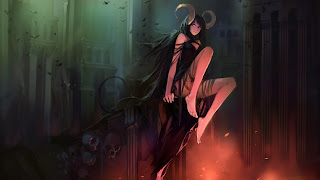 A new session started today and I thought it wise we ruminate on this issue, Girls and demons, no scrap that, UNIBEN babes and demons.

Is it not bad enough their are so many unseen forces against students in tertiary institutions already? Do the ladies really have to join? ‘wetin man wan com enjoy again?’

How many of y’all remember the program by Christ Embassy, “Do you believe in miracles” at hall2 car park last semester? Did you notice it was only, or okay, let’s say majority of those screaming during the casting out of demons were girls??? What is wrong!?

Well, okay, yes I know it’s same in other places outside school, but the one in school particularly UNIBEN which I know of has been increasing at a sporadic rate of recent… And it’s ‘ringtoning!’ more than alarming!!!

Well let me guess what just popped up in your mind, “abeg e, all those ones na stories! e no dey sup for real life say young babe na winch” well brother, if that’s you, know your village people ‘no get chill at all.’

To try clear your doubts, I will give you just two case because of time. That you believe is solely your choice.

It was around two in the morning, if you have stayed in hall3 before you’d know that 2am is like daytime especially if there’s light courtesy NEPA, boys will be screaming ‘I dey hungry o’, ‘my beans no wan gree done o…’, ‘who tiff my babe???…’ and more while prayers are ongoing in the field amidst night reading in common rooms and more…

My roommate who’s Mr. M was on his way to pray on the field when he met one guy in jitters as he tried to operate his phone, clearly something had to be seriously wrong to get a hall 3 brother all shaky, so in a bid to get in on the know and probably help if he can, he approached the guy. Upon inquiring what the shakiness is all about, the guy made known that he was on his way to night class at Basic Medical Sciences when he decided to get himself popcorn by Hall1, well after getting the popcorn, he decided to feel his legs and not take the short cut by mosque, so he took the road like he was off to basement, when he was by hall1 field he noticed a girl had been following him, so he literally slowed his steps (‘na babe na, no need to fear, make I see wetin she want’), the ‘babe’ eventually caught up and quite surprising to him chatted him up, what was more surprising was that she wasn’t preaching like he anticipated, she was asking questions about him as the walked on towards BMS, well in few minutes, the guy got quite uncomfortable and suspicious about the fact that she wasn’t divulging any info about herself but rather was just asking questions about him, so he made a move to know her, and he asked, what’s your name? she answered, and he tried getting to know more which she was stylishly eluding which got him more at discomfort, and that’s when it happened, alas! right beside him while they were by BMS bus stop, the ‘babe’ disappeared! Right by his side. He pinched himself to see if it was a dream, but when it dawned on him that this was no movie…

‘Nobody tell am, na so the guy tear race enter hostel back sharp sharp’

When Mr. M asked what he was trying to do now, he said: I want to call mum…

Well there was a church program that held there and in hope to see legit babes to ‘chyke’ , my bunk buddy, Mr. J went to the program.

Please permit me to say IDIOT had earlier wasted the perfume I was managing on his body which I never liked and after that incident wished I could burn, ‘make una no vex, na as e take pain me reach’.

So upon getting to the program, his eyes went sight seeing, he was on the lookout for as many prospective candidate as possible for his ‘chyking’ , in the course of doing this, he caught the glance of one on him on several occasions and he said to himself, ‘e b like say this Cirphrank perfume legit o, no wonder e wreck after e buy am’. He had intentions of making moves at her right there because delay is dangerous, but something in his mind kept telling him to reverence the presence of the Lord, that thing he said to me that night ‘guy, na God just save me o’.

And so came the moment, the pastor was fully charged with the holy spirit, and he went casting out demons, behold and once again behold, Mr. J’s dear candidate went violent as she fell under the anointing! She kept making different occult kind of moves, Mr. J nearly wet his pants at the sight…

He came into the room screaming repeatedly: “Thank God…” as he said to me, Cir, what would have been my case if I had actually gone out with her and we did the do (if you don’t catch, inbox Mr. J for practical explanation), won’t it have been series of endless flogging in the nights for me courtesy her spiritual husband? Chai! Cir, ‘abeg I no dey spray your perfume again o…’ and I was like see this one, even before you said, ‘I don already hide am! Before demons go pass through the perfume con meet me,’ GOD FORBID! I yelled at the thought of demons transfer, Mr. J slept that night singing songs of praise… For safety purposes I actually joined in.

Guys, here’s my advice, ‘I nor say make you no get babe o, but as you approach, approach with discretion and no turn 2face inside campus for your own good abeg’ it will save your life in so many ways.

Meanwhile, the issue remains: Girls and demons, why is it that the evil spirits manifest most in them???

The fore shadows, freedom at last. (An Independence literature)

CirphrankIndependence, Inspirational, literature, patriotic, SoldiersOctober 4, 201622
image from ask.naij.com It all started with Kunle looking at me in the eyes, saying Scott, I can’t do this anymore, not anymore Scott, this is outright slavery, I very much understood what he meant, I actually agree with him, …
END_OF_DOCUMENT_TOKEN_TO_BE_REPLACED
4

Take Your Life Back!

Cirphranklife seminar, Sponsored, UNIBENMay 8, 201717
If you don’t know already, know now: If it wouldn’t be of benefit ain’t telling of it. Simple.It would be an error to be in Benin and miss this. A real time great error. It will be outright ridiculous that …
END_OF_DOCUMENT_TOKEN_TO_BE_REPLACED

Reply to UNIBEN babes and demons, She narrates her ordeal.

CirphrankStory, UNIBENOctober 19, 201629
DEMONS AND GIRLS (UNIBEN AS A CASE STUDY) My name is you don’t really need, and this is real because I saw it with my own two eyes and I was not hallucinating,trust me! On that fateful day, I was …
END_OF_DOCUMENT_TOKEN_TO_BE_REPLACED
4

Walk me through Ekosodin she said, a guy narrates his divine escape ( UNIBEN babes and demons)

CirphrankStory, UNIBENOctober 20, 201610
Virtually everybody in Nigeria believes in witches, wizards and other forces. So do I. I’ve been hearing stories about these people, and I think I actually met one of them. Location: Uniben, student’s created walkway to 250lt, opp June12. I …
END_OF_DOCUMENT_TOKEN_TO_BE_REPLACED
6