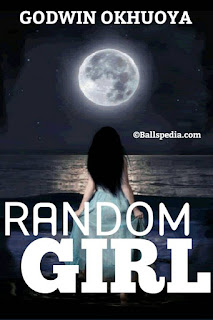 If anyone had told me I would be doing this a month ago, hell no! I would have argued it out to a nut, tied it to a knot and screamed ‘no’ from a roof top.
I wouldn’t have believed I could risk my life for a girl I had not seen.  What was I thinking? I must’ve been crazy!

Three weeks ago had me telling my roommate to give me one of the girls  on his contact, and he ignored me. It was a flat ‘no’, and with the way he gave me the long stare, I knew he wasn’t going to help my broken heart to a mend.
I just broke up with the girl I felt I was going to spend eternity with, and that even wasn’t why I was ready to impose love on any cute girl available.
I was tired, lonely. I had never felt that detached before, with the urge creeping through my subconsciousness. I felt I needed a new girl as soon as possible.
My roommate came back that night after I was done making dinner. It was Eba and Egusi, graced with diced meat, ponmo and crayfish. It looked demonic, though not in the sense of it being served to an oracle, but like something that would haunt the soul and belly of any man. He sat to eat.
After he was done levelling the mountain into a depressed valley, I looked out from where I pretended to be going through my final year project on my laptop, as I watched him suck up his fingers like a hungry baby on the feeder. He enjoyed the meal.
I waited a while, for him to get his senses together and forget about the food, then I came again asking, as I polished one of my shoes, spreading out my shiny tools on the frosty tiles.
“And how did the day go?” I asked.
It took him a while to reply, as he let out a deep breath and searched for me to affirm my activity with the sides of his eyes.
He knew where I was riding at, and didn’t want to waste much of my time. My Eba had done the begging job; it was now time for me to reap my sown seed.
“There is this girl on my friends’ list on Facebook. Don’t know, and she loves talking.” he said, then sighed. I stopped striking the touch brush against the already shinning shoe, and let out a smart smile.
“Let me have her contact. She must be in need of a lover.”
My roommate smiled and nodded. “Don’t tell me you are really reclining back to your old self? She broke your heart, I know…”
Right there, I went mute on hearing. I wasn’t just ready to listen to his ‘put us out of distress, oh Lord’ speech.
He finally handed over the contact.
After 48 hours, I had used every possible trick I had in my head, and the girl finally became mine. She was tougher than my roommate had described, but what sealed it up was my letting her in on my recent pictures.
The skincare routine was what she screamed. “How come you have such beautiful skin?” That was the 7th hour after meeting her.
She called and we spoke; it was spooky. She agreed so fast after all and it made me feel like I was dealing with a demon who again, was going to be my soul.
She was just a random Facebook girl for goodness’ sake, and I wasn’t even too convinced a guy wasn’t sitting behind the account. This was Nigeria, and anything, everything was near possibility.

******
Close to a month after the relationship started, she was all over me, and this made my roommate extremely jealous.
She wanted me to be on the phone forever and text her like never. She sent cash at the slightest announcement of my broke state. But,  down in my mind, was the fact that she was still a random girl registered.

She texted me that morning to tell that she had sent my transport fare,  and without a second thought, I was on the road. Right in the park, the thought of my stupidity dawned on me. I must be crazy!
I just couldn’t stop myself. I pushed it this far. I wanted to see the real face of the ‘she’ I had been enforced to love.
She had sent me pictures of herself, but no, I still wanted to see her.
I got to the city of Oshogbo before 6pm, and there she was, gladly waiting for me at the park. She was a reflection of the lady in the picture she had sent, no difference. And the first thing I liked about her, in person, was her smile. She wasn’t as tall as I expected she would be, but her height was still fit enough not to shake off my interest.
It was a city full of life, and that alone sparkled a wire in my head. We were going to have fun, I thought.
We had a car take us into the heart of the city, and soon, we were on the driveway leading to her apartment.
I was taking a risk. My head just wasn’t correct. I was way too in love with a stranger. I was lost in the web of lust for a random girl.
It wasn’t my plan but it happened. We could take sense of our presence in the dark room we slept, and soon, a thing led to another. The touches produced the hard breaths, and back to the wall, we made love all night.
It was less of a show of strength, and I rode her to the peak, till she lost it all to pleasure. She finally asked for a break, and then I knew she had reach her limit; the satisfaction she derived was at the maximum.

I went back home the next day, and everything about me changed.
Days later, I began experiencing a kind of weakness, and every kind of symptom came up. At first, I thought it was a fever, but my assumption ended after a week passed and I wasn’t getting better. I never expected this. This was trouble. The fact that I had unprotected sex with the random girl rang a bell in my head, and soon, I was down in a local clinic for a blood test.
I sat in the reception, waiting. Beads of sweat ran my forehead as my heart hammered violently against my ribcage. My heartbeat was louder than my thoughts, and I felt the cold hit me harder despite the leather jacket, socks and gloves. My temperature was high.
The lab scientist called me in for my test result, and the dead look running his face from end to end spelt doom.
Right in my head, was a search for the quickest way to end my life.
He pinned his lips close to each other, as he narrowed his gaze through his thin-lensed glasses.
He signed on the paper that contained the result and gave it to me, knowing I would find it hard to relate the result to a common disease. The handwriting was just too bad.
“You are positive.” he said and I shrugged away as an initial response.
My face was drilled with dread. I was mad at myself, at life and at everyone else. The random girl was at the top of the chain and I could never be angrier at anyone else.
I heard a lot about HIV, but I never for once thought a thing like that could happen to me. I expected a pack of condom and a few advice, then I was ready to get out and face the other side life had presented me.
I was flipped a note,  and when I looked up at him,  I caught his words.
“Get to the pharmacy. Ask them to give you the drugs in this note. These would take care of your typhoid.”
-TYPHOID- the word rang in my head as I went blank. My look was expressionless as I asked again.
“Was I positive with typhoid?”
The man in the white lab coat stopped writing on the red sheet that was meant to contain a test analysis.
“Yes!” he replied and looked away,  expecting me to pull myself together and get out of his face.
Oh my!  The relief in my belly was an imported one and right then, I swore in my heart never to have sex anymore. I didn’t even want to think it through for just a moment.

CirphrankUpdatesAugust 29, 201713
Sometime earlier, same thing that happened to the now 9mobile happened to the TV game show, Who Wants To Be A Millionaire. Her major sponsor MTN pulled out and unlike the telcom network that simply changed name, they just had …
END_OF_DOCUMENT_TOKEN_TO_BE_REPLACED

Cirphrankliterature, Poem, Poetic, Spoken WordMarch 19, 201915
We have an abundance hereWith every tick-tock We having thick talkAbout happiness. There’s a whole lot of self-love quotes flying …
END_OF_DOCUMENT_TOKEN_TO_BE_REPLACED
2

CirphrankliteratureJune 26, 201741
This is my first spoken word piece to be released, so please don’t judge when I gush about my awesome videographer/editor Emmanuel-King, and Sound Engineer Ighile Phillip (69house-party) . -Huwa Huwa is a young lady from UNIBEN, an undergraduate studying …
END_OF_DOCUMENT_TOKEN_TO_BE_REPLACED
1

CirphrankArticle, literature, Poem, PoeticDecember 14, 20176
I saw faces looking like masquerade, Twerking to the rhythm of tosses made from men lips, Their eyes are tips, …
END_OF_DOCUMENT_TOKEN_TO_BE_REPLACED