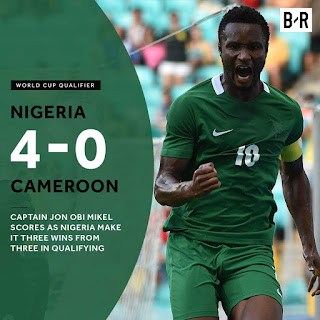 Before I talk at all, see the below first;

Before the game came up, there were a number of agitations calling for Eagles not to make a mess of things this time. Like Complete Sports Saying Eagles Should Just Win and comments like the below pouring in.
One can with all form of loudness say Eagles soared royally on Sallah day. In a match that many have quickly likened to Liverpool’s trashing of Arsenal, like a twitter user said Ighalo and Mikel has shown all that they play good football in China too.

Cameroon is the Arsenal of this match while Nigeria is the Liverpool. Moses is Nigeria’s Salah #FanLiveNG #NGRCMR

All made in CHINA 🇨🇳

Buy a Footballer from CHINA today!

Football has this spirit of unity it brings be it as a side losses or like in this case win! Nigerians have heavily taken to twitter to celebrate the victory with every form of tribalism void, and tweets showed even everyone noticed. Including ex-president, GEJ.

Football is a great unifier and the Super Eagles have done much to unify Nigeria by this win. I celebrate their talent. Go Super Eagles. GEJ

Gosh! When we unite and show up as a nation we soar like super eagles with the heart of a fierce Tigeress, indomitable over all lions!😘🤗💖💖💥💫

Mikel Obi’s performance was ace outstanding that had many tweeting his praises:

Anyone saw that Mikel Obi assist to Odion Ighalo for that goal? Mikel is key!! Nigeria 1-0 Cameroon. #NGRCMR #SoarSuperEagles

Victor Moses was also astounding, and wasn’t left out in the praises.

Victor Moses. Has been the best super Eagles player since he started playing for Nigeria. He makes our team look like a European side.

And then of course, those you probably have been itching to read, the savages:

And what did Nigerians find poor in the match?

The only poor performance in the whole Super Eagles match today is the commentator. #NGRCMR

Men this Igbo Commentator is stupid even his colleague had to correct him.. his assessment of the game is idiotic… #NigeriavCameroon #WcQ

The Igbo commentary guy for #NigeriavCameroon has been saying consider

And DJ Exclusive too;

The commentator is giving me jokes – Super Sport 3 #NigeriavCameroon 😂😂

Meanwhile as rightly stated by NPFL Statistics, we have remained unbeaten in our last 33 World Cup qualification matches – the longest current run ever by an African team.

First half strikes from Changchun Yatai forward, Odion Ighalo and skipper John Obi Mikel handed the Gernot Rohr’s men a deserved lead before referee Zaghoul Ibrahim Selim Gheal stopped the game for the half-time break.
Chelsea’s Victor Moses and Leicester City forward Kelechi Iheanacho completed the damage after restart to ensure the 2013 Africa Cup of Nations champions maintain their dominance at the summit of Group B with nine points from three games. -GOAL
In case you missed seeing the match or want a re-feel; watch the comprehensive highlight below.
If you ask me, Gernot Rohr is doing a great job, what do you think?
DOWNLOAD POST AS PDF
Share

CirphrankQuotesSeptember 1, 201713
Here’s from me to y’all:  Happy New Month. May previous months be not better. DOWNLOAD POST AS PDF
END_OF_DOCUMENT_TOKEN_TO_BE_REPLACED

CirphrankTechy, update, UpdatesJune 2, 20184
After being under construction for a pretty long while now, the shop is finally launching. A mini yet efficient platform …
END_OF_DOCUMENT_TOKEN_TO_BE_REPLACED

CirphrankUpdatesAugust 29, 201717
Sometime earlier, same thing that happened to the now 9mobile happened to the TV game show, Who Wants To Be A Millionaire. Her major sponsor MTN pulled out and unlike the telcom network that simply changed name, they just had …
END_OF_DOCUMENT_TOKEN_TO_BE_REPLACED

Momondo- The DNA journey, get to know your ancestors in a spit!

Cirphranklifestyle, UpdatesMarch 12, 20174
What you are going to see in the video below is an exquisite display of High-end science simplified. A group of Scientist having developed protocols to trace one’ ancestral origin gathers a number of people from various locations and eventually …
END_OF_DOCUMENT_TOKEN_TO_BE_REPLACED