The disturbing state of the Biafra Movement – Seyi Law 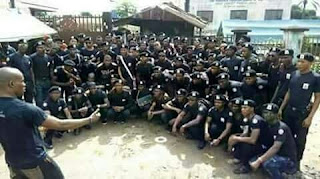 Earlier today, one of Nigeria’s finest comedian made a post, on a critical issue, one that begs for due, we see until but sense in it, “na beta yarn” hence  the reason for this publication of it, let us know what you think of it when you are done reading.

Have you heard that BIAFRA now has a SECRET SERVICE? When will the Government rearrest Nnamdi Kanu or have a referendum? Is Osinbajo trying to be politically correct or just following the silence is golden rubbish? There are certain things you don’t condone and this is one of it. The build up of Al Qaelda, ISIS, Boko Haram etc all started like this. From formation to subtle killings and then, massive bombing and we will beginning to look for a needle in the forest.
The IGBOs in the NORTH will not come out to jointly condemn Nnamdi’s act now, but once the North start issuing threats which is not right by the way, they will break the code of SILENCE. If you don’t support this, speak now and not later.
Walls and borders have created disunity among us. Natural resources has become the bane of our agony. I hope we will not fold our arms and watch this Nation plunge into an unnecessary war. Anyway, before you crucify me, remember and know that my wife is Igbo and I have a daughter who is Yoru-Igbo. SILENCE on this means APPROVAL.

CirphrankArticleAugust 12, 20175
Let me guess, when you saw the title at first, you were like: the heck is he up to again? what on good planet earth is wantrepreneur??? Well as I try to make this short as possible as for as …
END_OF_DOCUMENT_TOKEN_TO_BE_REPLACED

CirphrankTechy, update, UpdatesJune 2, 20182
After being under construction for a pretty long while now, the shop is finally launching. A mini yet efficient platform …
END_OF_DOCUMENT_TOKEN_TO_BE_REPLACED

CirphrankArticle, UpdatesJanuary 22, 202017
No, it’s not too late, still the first month and here’s the first post off the blog for the year …
END_OF_DOCUMENT_TOKEN_TO_BE_REPLACED
6

Cirphrankmusic, UpdatesAugust 27, 201736
People need to stop being hypocritical and try being realistic and stop misusing bible passages to guise misconceptions. I really do not see what all the fuss is about as regards Tasha Cobbs featuring Nicki Minaj, so long as I’m …
END_OF_DOCUMENT_TOKEN_TO_BE_REPLACED
2