The fore shadows, freedom at last. (An Independence literature) 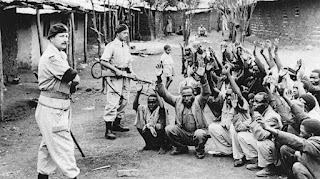 It all started with Kunle looking at me in the eyes, saying Scott, I can’t do this anymore, not anymore Scott, this is outright slavery, I very much understood what he meant, I actually agree with him, but perhaps he was right when he said; Scott, you are just scared! But there was no way I could turn my back on such a decision, no way I could watch him walk through hell alone.

He was ready to hold the sun within his palms, he was ready to bear the burn as long as life will be okay for the children unborn, see Kunle was not just one of his kind, he was unique, one of a kind. And so he marched on, the only weapon he could afford was a baseball bat against guns and the song on his lips: God be with us, he chanted on and on all along and we were right behind him chorusing enough is enough.

Adunni, you give butterflies residence in my belly when I set my gaze on your beautiful skin, I run out of words to speak, each and every day, Adunni you are a goddess and I am not gay. Don’t tell me no, don’t tell me you didn’t see the foreshadows, don’t say you didn’t know even before I said, I love you.

Uchena my guy, ‘you know say I gbadun you die, no be homo, no b say I dey wash you, anyone mess with you, on top your matter, I’d probably die with my finger on the trigger, cos me and you go way back, like back to back…

But why would I do that?

See, the nails didn’t hold Christ to the cross, love did. If love is so strong, freedom is bound to be.

They should have seen it coming, whatever has a beginning has an end, they had pushed us passed limits, now our actions be without limits.

We had pleaded to deaf ears, petitioned but no one would listen, the agitation had been piling up just like our allegations had been piling up somewhere in files laying in a corner in their offices, while they drink and drive about off our sweats, now to a rising we say yes, the confusion and fear no more reside in us, they are selling slavery and we’re not buying anymore.

I want to believe they saw the foreshadows, but chose to ignore it. They’d rather undermine us than take heed.

Kunle had fearlessly led the peaceful march we went from Street to Street, the deadliest of “weapons” we wielded were tiny leaf branches and max, Kunle with the bat. And then we got to the road, that road, apparently in wait was about 300 soldiers, each had his hands steady on his gun, we were nowhere near the barracks but yet here they were, a road barricade with a mini tent pitched by the roadside, obviously, their’s as it had the military imprints on it. And out came a man, he walked up to us, gave us a derogatory look, then asked: who’s leading this protest? before any of us could utter a character, Kunle stepped forward to him, and he roared: Captain! The man beside him yelled: sir yes sir! with his husky voice he said, give me your side-arm, before any of us could make a dash to prevent that which we sensed was about to happen, there was blood… I went diving down on my knees, no way I was going to let him fall as he went down on his back I received him on my arms, but there was blood, gushing out of his forehead, and there amidst it all, bullets flying, bottles smashing, me weeping like I intend to keep things noiseless, repeating ‘no Kunle, not like this… Don’t leave…’ he had this smile on his face, I’d say a beacon of hope, he drew his last breaths muttering: freedom at last, freedom at last… And at that moment I just knew in my heart, convinced in my mind that “Aluta continua, Victora acerta”

A lot of us were lost, more than a child in the wilderness that day, the oblivion kind of lost. But eventually, victory to us was given, now on the first of every tenth month of every year, generations that have come celebrate Independence.

See, our fathers fought teeth and blood for that which we are enjoying today, what are you doing to keep it? are you showing love or hatred to the next door guy from the next tribe, if he asked you out would you say yes or no simply because he’s Ibibio?

The agitations are on, IPOB, MASSOB, and more, things would have been better if we had love stronger than a covalent bond, blood was spilled, spilled to get the freedom you’re enjoying today, don’t waste it! The least you can do is keep this unity, the fruit is worth it.

Motivational Quotes to push you to great goals for the week

CirphrankInspirationalOctober 3, 201612
Credit: Google search Good afternoon sound youths, sorry this is coming late, just that I’ve been checking out some deals which I will be informing you guys of soon enough, just watch out. This noon, I bring you 10quotes to …
END_OF_DOCUMENT_TOKEN_TO_BE_REPLACED
2

ARAliterature, love, PoemDecember 16, 201714
I fell in Love before I even knew what it meant, when Judith asked me playfully when I was just …
END_OF_DOCUMENT_TOKEN_TO_BE_REPLACED

Grace… What is it?

CirphrankGrace, InspirationalJune 1, 201715
Many misinterprete what Grace stands for and even many more abuse it. But Grace was never, is never, and will never be a license to sin. –Cirphrank Grace is man Gaining Righteousness At Christ Expense, never forget: you don’t earn …
END_OF_DOCUMENT_TOKEN_TO_BE_REPLACED

CirphrankInspirationalJune 9, 20164
Moral Lesson : Your NatureAn old man saw a scorpiondrowning and decided topull it out from the water.He calmly extended hishand to reach the creature.When he did, the scorpion stung him. With the effect of the pain, the old man …
END_OF_DOCUMENT_TOKEN_TO_BE_REPLACED