The Old Lady Got Lost. A tragic tale of humor! 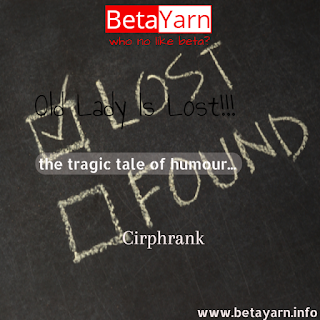 This is a true life story, told to me from the horse’s mouth witness… lol, okay don’t mind the humor, just know it’s actually true.
Before I get to it, let me tell you of how I almost got entirely lost someday. It was just like another regular day, but thing is, on this day I was in this bus on my way to a pharmacy I didn’t really know of, the only thing I knew of the place was its name and that its other branches in places far off are where we could get a certain kind of drug.
So I had spoken with the ‘conductor’ earlier, solicited for his aid to help signal me to alight once we were by the pharmacy, he gave me his consent and when the bus started off, I did good to remind him for a couple of times but didn’t know I was just doing good but not best which I later regretted.
Almost 15minutes into the ‘journey that was supposed to be short, I had earlier gotten confirmations that the pharmacy I was off to isn’t far. I got worried though with some little it of confidence left in me on the ‘conductor’, then I tapped him, was like: “Baba, howfar, we never reach the level?” he went: “ah! Na im you no talk since??? we don pass the place tey tey na! Shoo, na the first junction wey we pass ooo” chai! I was dumbstruck, couldn’t believe as he even continued to deny me reminding him of my plight, I alighted and had to jog back to the place upon his description, it wasn’t funny as it turned out that the length that I had to cover on leg was like an Israelite wilderness wondering, I was left distraught panting with an overflow of sweats on my skin as I got into the pharmacy, stayed a while longer in there ‘cos of their Air Conditioner. I think the ‘conductor’ did that on purpose because I priced down the fare, and for that I had always remembered him in my prayers.
***
Well, in the case of our lady, she had taken a bus going to Benin,she was so old she drew attention, and that got the driver concerned that he had to ask right before the journey started “Iye, where you dey go?” ‘Iye’ means ‘aged lady’ in Benin, she replied that she knew where she was headed.
Few minutes into the journey, driver asked again, “Iye, where you dey go?” and her reply was same. Almost an hour into the journey, with some element of worry obvious in his tone the driver asked the question again, this time the Iye gave same answer but with an attitude of you are worrying me attached.
The driver knowing they were getting closer to the last Bus stop decided to ask Iye of her destination’ location yet once more, and this time it almost started a fight as Iye got really annoyed saying she’s had enough of the insult, that she is old enough to know perfectly where she’s headed and she has been answering with that since, and why is she the only one being questioned, it took enough plea from fellow passengers and apologies from the driver to calm Iye down. Upon Iye having calmed down on her anger, the driver sealed his mouth.
Eventually, alas! they were at the last bus stop. As every one came down, driver was like: “Iye, we’ve gotten to the last bus stop o, which motor are you taking? Let e see if I can help you call one…”
And Iye replied: “No o, we’ve not gotten to my destination o, this isn’t where  am going…”
The driver was confused, he looked around shaking his head and said to the other passengers, see what I’m saying, “Iye where then are you off to…”
And Iye replied: “where mango trees for plenty”
Jesus!!!
Iye!!!
The passengers left the driver with their sympathies as he can’t possibly leave the old lady at the last bus stop which was miles ahead of where Iye’s destination was.
And the trees which she was on the lookout for had actually been cut down by the government in a bid to develop the area.
And alas! Old lady was lost…
Gotten lost before? Let’s hear your story, or if it’s a long one, send it to our email: hub@betayarn.com for publication. Kindly Share.
DOWNLOAD POST AS PDF
Share

CirphrankMisc, TechySeptember 6, 201715
In this post, I shall be dis-certifying some AdSense myths and giving tips that will automatically see to your account …
END_OF_DOCUMENT_TOKEN_TO_BE_REPLACED
1

Dear daughter. A sonnet to her.

Cirphrankliterature, love, Poetic, StoryDecember 10, 201627
Dear daughter, Though dark, she had a skin like the moon. She glows. Eyes like the stars in the dark Everything in here is true and for you But she may read it before you, hopefully it sets her free …
END_OF_DOCUMENT_TOKEN_TO_BE_REPLACED

Cirphranklife, literature, StoryOctober 13, 201620
A heart of bronze, eyes that had bled blood, two pens, none mightier than a sword, a glass of dark rum and a bible beneath, ashes on my feet and dust in my hair, a foggy window and a perfectly …
END_OF_DOCUMENT_TOKEN_TO_BE_REPLACED
2

Diary Of A Broken Heart

CirphrankPoetic, StoryMarch 14, 201813
I know loving is not a crime but suddenly you felt handcuffed to the relationship but then it hurts when …
END_OF_DOCUMENT_TOKEN_TO_BE_REPLACED