What was that stupid thing as a fresher? 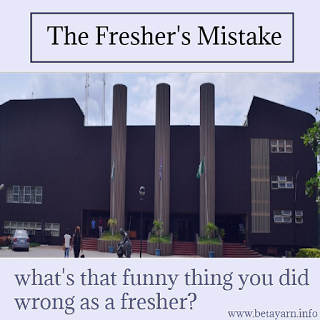 Okay guys, Happy Monday, let’s get fun discussing today, let’s hear it from you as I go first, what was that thing you did that was funny or stupid as a fresher in your institution/university? Me first, let’s go.
Location: UNIBEN       The mad walk!
There I was with a fellow fresher, almost a fresher actually, we were there for P. UTME. Thing was, we arrived a day earlier and lodged in our brothers’ crib off campus(BDPA). On the day of the exam we didn’t leave in the morning as it was holding in the afternoon, by 1 or 3, can’t really recall, hence our brothers had left earlier, when we set out for school, we first o trekked to the expressway from a street that was quite deep in. Now here’s where it got messy, when we got to the express, in front of 21st street junction, we got confused, unsure of the way into school, after almost a debate of 30mins we decided to trek into UBTH as the rascal I was with claimed he had heard there is a way into school from there, thing is UBTH is a whole lot of length from where we were! and we did the trekking with wet clothes as were trekking under the rain!!!
Then upon getting to UBTH, we sought for directions to NEW 100LT in Engineering, which turned out to be almost same length. Probably you don’t get the stupidity in what we did yet, here it is:
Main Gate which leads straight into school was right opposite us, on the other side of the express where we stood debating a way in right under the rain! All we needed to do was crossover.
But mbanu! the Valentine oversabi too much and me kuku ma no know anything! confused otondo!
***
Location: UNIBEN      Cried Like A Baby
I resumed not as one of the early birds, the first time I got in was funny, not pleasantly, there I was in the lecture theater with a 1000+ other freshers and they all seemed like they had known each other for years and I was the only odd one, to say I felt like a chick underwater is not far from it, I was getting choked with the feeling that I was the only odd one. You’d see me seat somewhere and in a minute someone shows up to say he/she was seated there, and I look to my side to find the crew nodding in affirmation to it! That happened quite frequently leaving me jogging seats, and then to make matters worse the lecturers would come and start teaching mathematics that baffled my understanding and it seemed like I was the only one that found them equations looking like gibberish, so after one of the classes on that fateful day, I ran to Maths Department, walked up on of the staircases, and when I affirmed no one was watching nor was around, I cried out my eyes. Man…
– Jo’ e (Engineering)
***
Location: UNIBEN (Hall3)  Oppressed To Tears
Let’s be quick with this lest I get pained to tears again, then I was fresh and had not known “how e dey go”, my own roommates moved my foodstuffs!!! no fuss made could bring the eatables back, I had to start all over again as regards food, the moving of my foodstuffs moved me to tears, painful one, but now! Tah! E no fit apun, if not, e no go funny, na me be the terror now!
– Kelvin
***
Location: UNIOSUN     My Observations And Errors!
I was utterly confused the first time a lecturer said: “it’s not compulsory to buy my textbook but classrep, let me have the names of those that have made purchase”, I was like:

And then there was this day I was walking with this beautiful girl, behold people of God, before we got to the gate, she had hugged no less than 10 people! God! That day I vowed never to walk with a girl on campus except it be my girlfriend!
And I noticed something as a fresher, my best meal for the first week was bread and coke, third week had me wondering why garri suddenly became so sweet and the only thing appealing. (when money don finish!)
And I always pondered how me and my guys turned super humans when the invigilator says time up, we answer 3hr questions in 50secs.
– Nasri
***
Location: UNILORIN       My Fears And Mistakes
I took a long walk that could have taken me a stone throw to get to where I was going. Trust me, wasn’t as simple as it’s seeming.
I refused to use the elevator as I was scared that NEPA might take the light and I’d be stuck midway hence I trekked to the building’ fifth floor.
I paid N200 for a distance of N50. I always remember the wicked driver in my prayers.
– Mife
***
Location: UNIBEN     The E-Palava
There I was, a library “pro” but a fresher still, talking to Chimnoso who was an older colleague in the school. He said, man I need to use the computer at E-Library, next thing I was like: Computer? in E-Library? I haven’t seen any since I’ve been going there o… the guy was like:

It was later I realized E-Library is Electronic Library and not Library Extension as I had thought, man that was dumb.
– Williams RX
There you have it, the stories of a number of peeps, what’s yours? share via the comment box, let’s laugh and learn. Go on now, let’s here from you, and share too.

All content herein in this blog post copyright of there respective owners, written and edited by Cirphrank, on no account should the content be partially or fully peddled without prior permission, infringement would warrant consequences. Thank you for your compliance.

Cirphrankmusic, UpdatesAugust 27, 201767
People need to stop being hypocritical and try being realistic and stop misusing bible passages to guise misconceptions. I really do not see what all the fuss is about as regards Tasha Cobbs featuring Nicki Minaj, so long as I’m …
END_OF_DOCUMENT_TOKEN_TO_BE_REPLACED
2

The gods are scared

CirphrankArticle, gods, scared, schizophreniaAugust 8, 201623
It’s been long I wrote something short, but here comes an issue I have to report. I think they have a personal vendetta against me, and by they I mean the gods. I’ve been off the book for quite some …
END_OF_DOCUMENT_TOKEN_TO_BE_REPLACED
8

5Tips For A WordPress Beginner

CirphrankArticle, Techy, Tips, WordpressMay 8, 201731
Okay there! In this post, I’d be highlighting to you 5 tips that will help smoothen rough edges in your blogging journey with WordPress. Don’t Use WordPress.Com: I wasn’t  paid to, no I’m not TRG to deface them, but if …
END_OF_DOCUMENT_TOKEN_TO_BE_REPLACED

5 Reasons Why Everyone Should Be Tech Inclined

CirphrankArticle, TechyApril 28, 2018141
Hiya everyone, good morning, I’m pretty sure you’ve had quite a swell time sime we last discussed. Today, I’ll be …
END_OF_DOCUMENT_TOKEN_TO_BE_REPLACED
2