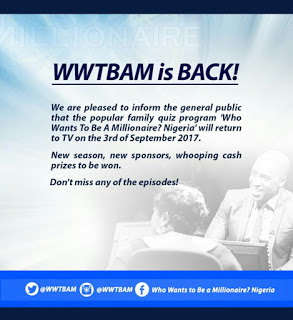 Sometime earlier, same thing that happened to the now 9mobile happened to the TV game show, Who Wants To Be A Millionaire. Her major sponsor MTN pulled out and unlike the telcom network that simply changed name, they just had to shut down operation.
But guess what???
There is good news!!! the Tv show is about to go operational again!
11hours ago, WWTBAM took to their twitter handle to announce the arrival of their new sponsors:

#PressRelease announcing the return of #WWTBAM and introduction of the new sponsors ongoing…#WWTBAMReturns pic.twitter.com/2p5m4oHRAn

And then they followed it up with this tweet:

Welcome on board @airopaycare, the new sponsors of @WWTBAM. We look forward to a great partnership with your team. #Signed&Sealed. pic.twitter.com/HAvzSrjNEn

And then they posted the picture above with the caption: “We are back like we never left!” with CC: reference to the show’s awesome host Frank Edoho and their major organizer Ultimalimited

Meanwhile in another entirely related news, when asked if he’ll still be the host, Mr. Frank is busy playing coy:

😊Thanks. Host will be revealed to you soon. https://t.co/faSeK8a2Db

For me, I’m just glad they are back and can’t wait to see Sir. Edoho scaring people again and yet knowledge we gain.  Expected Time Of Resumption : 3rd, September 2017.
DOWNLOAD POST AS PDF
Share

CirphrankliteratureAugust 29, 20175
Can’t Make Old Friends ‘Twas quite long and stressful at school that day, Fridays are overrated, no much fun except you are partying or seeing a game So I ran home, hoping to receive sweet cuddles from my bed, And …
END_OF_DOCUMENT_TOKEN_TO_BE_REPLACED

CirphrankTechy, update, UpdatesJune 2, 20184
After being under construction for a pretty long while now, the shop is finally launching. A mini yet efficient platform …
END_OF_DOCUMENT_TOKEN_TO_BE_REPLACED

Cirphrankmusic, UpdatesAugust 27, 201761
People need to stop being hypocritical and try being realistic and stop misusing bible passages to guise misconceptions. I really do not see what all the fuss is about as regards Tasha Cobbs featuring Nicki Minaj, so long as I’m …
END_OF_DOCUMENT_TOKEN_TO_BE_REPLACED
2

CirphrankArticle, UpdatesJanuary 22, 202019
No, it’s not too late, still the first month and here’s the first post off the blog for the year …
END_OF_DOCUMENT_TOKEN_TO_BE_REPLACED
6